Why Nanaimo Has Such Wacky Street Names

Why Nanaimo Has Such Wacky Street Names 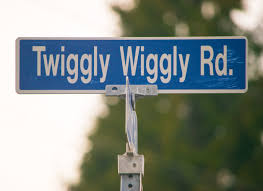 “If a street has a spirit, no matter how narrow it is, we can breathe comfortably over there.” ― Mehmet Murat ildan
Have you ever wondered how come there are so many odd and wacky street names in Nanaimo? Many people say that it was Frank Ney himself who chose some of the more colorful street names.  Streets such as Bergen-Op-Zoom, Twiggly Wiggly, and Dingle Bingle are certainly not common streets that you might find elsewhere.   In Nanaimo, Bergen-op-zoom is in a subdivision with names such as Amsterdam, Tulip and Arnhem Terrace. Frank Ney served in the RAF and RCAF as a pilot during World War II. The naming of those streets was in memory of the Canadian involvement in Holland during the war. Jingle Pot was the name of a mine in that same area during the early days in Nanaimo. Panorama View Drive was given the name as the street offered panoramic ocean and city views at that time.

David Gogo, a long-time Nanaimo resident and former keyboardist for the band “Trooper” explained  in CBC interview, that Ney would appeal to self-interests of investors by allowing them to name streets after themselves, or, in the case of Twiggly Wiggly, “He would just ask his kids to come up with funny names”, according to Gogo. It really cannot be too much of a stretch to understand this once you remind yourself that Frank Ney was often found in downtown pubs chatting to strangers while wearing a pirate costume!

Back in 1934, a newspaper article entitled “History of Nanaimo” reported that Eaton Street was named after Samuel Eaton, chief of the Snuneymux First Nation and that Pine Street got its name due to the abundance of pine trees that grew in the neighborhood.  What is extremely interesting to note is that the majority of southend streets were given their names for mining bosses.  If they had named the streets for the Chinese workers who had lost their lives in mining accidents, the southend streets might have been called “34 Street” or “312 Street” since Chinese workers were not recognized at that time by their given names.

What is the best street to work or live in Nanaimo?  I would profess to have a sentimental feeling towards “McCullough Road” located in the Northfield industrial area across the highway from the Nanaimo Golf Course.

Wherever you live in Nanaimo, it is important to know the value of your home or property.  I would be happy to provide you with a complimentary no-obligation market evaluation so that you have a good understanding of what your home is worth in the current real estate market.   As I always say, it is important to think like a millionaire when it comes to sell your home.

For a list of tips on how to prepare your home for sale, send us an email to brian@mmshomes.com. Let our McCullough Marketing Team assist you in moving…in the right direction.

We look forward to hearing from you.

Why Not Live at Home Like You’re on Vacation?

With Growth Comes Discontent and Disillusion

“Whatever the mind of man can conceive and believe, it can achieve” ― W. Clement...

Consequences or Lack There Of

“If you build the guts to do something, anything, then you better save enough to face the...

“The Times They are a Changing”

The times they are a changing:  Bob Dylan The fabric of the world has changed, and it may be what...

We use cookies to ensure that we give you the best experience on our website. If you continue to use this site we will assume that you are happy with it.Ok